I went to see the 5th INF World Naginata Championships on Sunday July 3rd in Himeji. It was really interesting! I'm very lucky to be living in Japan when it occurred!

(Note: You can click on every photo and video in this post to see a larger version.)

I arrived shortly after the opening ceremony started. Here are all the participants from every country: 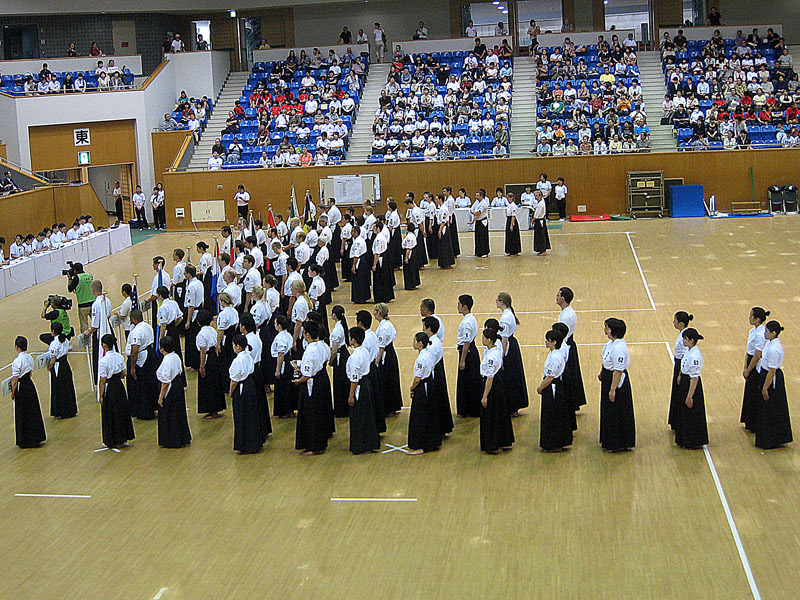 And here are all the flags (one for each country; twelve countries participated): 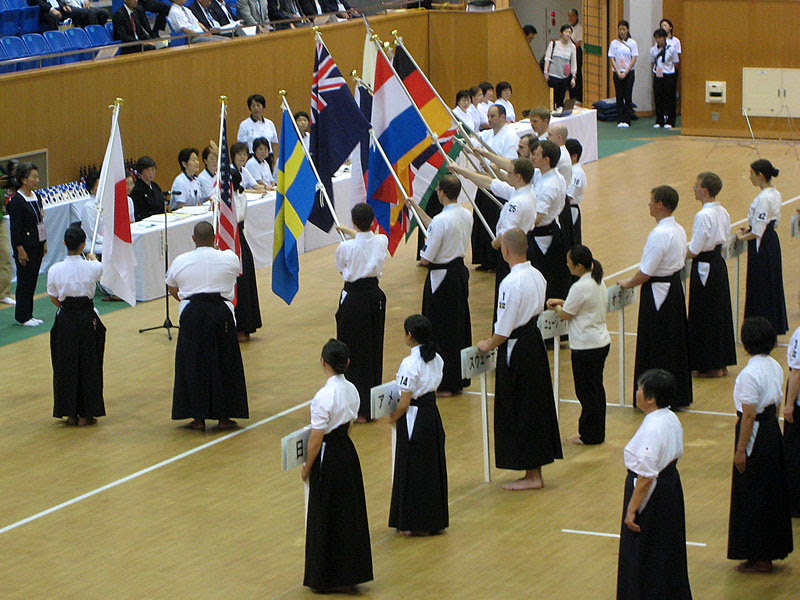 First there were demonstrations of Tendo-ryu and Jikishinkage-ryu Naginata[1], which I have never seen before so they were very interesting! Unfortunately none of the pictures I took came out (I didn't use a flash).

Next was the engi (forms) competition. I was surprised to see mixed male & female pairs; I didn't know they did that! I'd never seen it before because all of the clubs I practice with are almost entirely female. 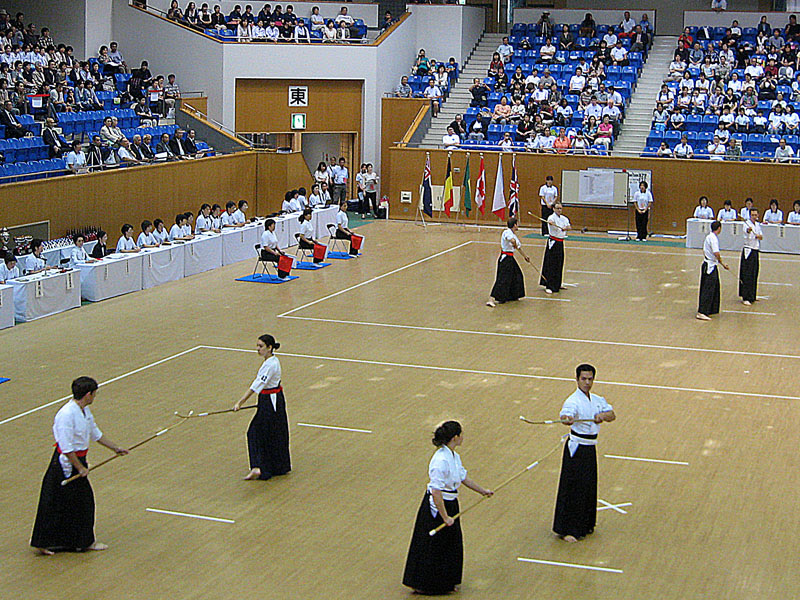 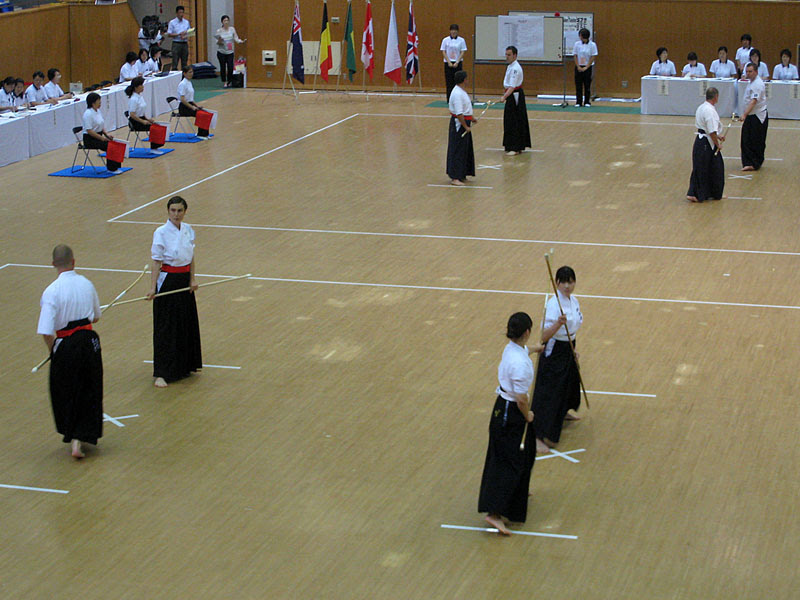 Here is a video of the match for 3rd place, with the 1st place match going on in the background:


Then there was the women's individual shiai (sparring). It was my first time seeing white bogu (armor). Another thing that was new to me was seeing what happened when a competitor wasn't present. The person who was there entered the match area, bowed as if the competitor was there, and then walked out. I'd like to know the reason why they go through the trouble of doing that! 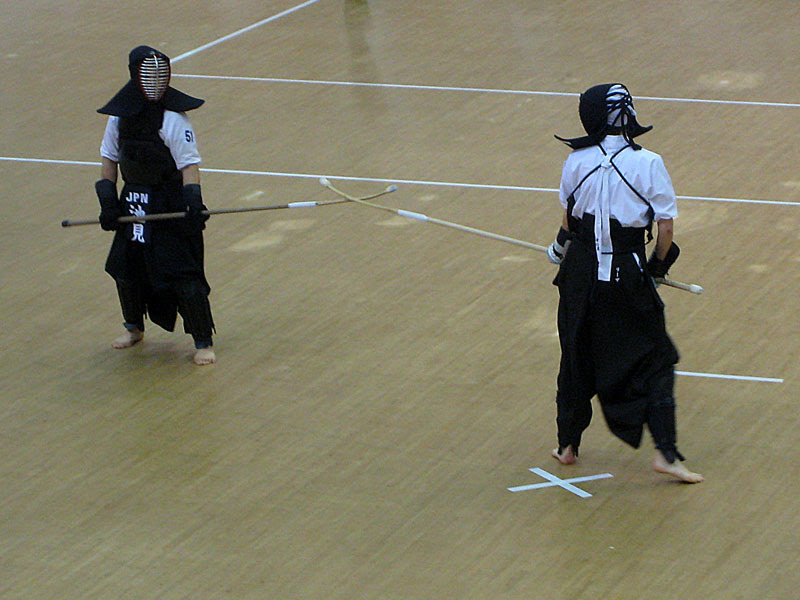 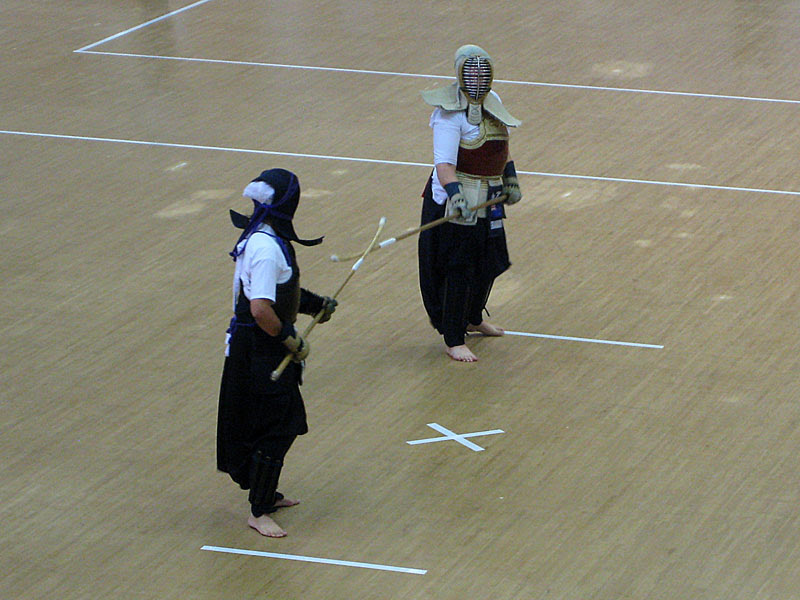 Here is a video of the match for 3rd place, with the 1st place match going on in the background:


Then there was a rhythm Naginata demonstration:


Followed by a ton of very cute little kids performing happoburi (solo practice exercises) and engi. I didn't take any photos of that, but here's a forest of naginata while they wait to perform: Then there was a break for lunch, during which I bought some very cute Naginata folders. My friend wanted me to keep her company while she bought her first naginata, so I missed the beginning of the men's individual shiai. The men were more aggressive than the women. And I was surprised to see more men participating than women; Naginata is practiced almost exclusively by women in Japan, but internationally more men than women practice.

Also at this point I stopped taking photos because I was getting tired and just wanted to enjoy the competition without bothering with my camera. But here's a video of the match for 3rd place, with the 1st place match going on in the background:


After the individual shiai was the team shiai.

And then there was a very amusing Naginata vs. Kendo demonstration: 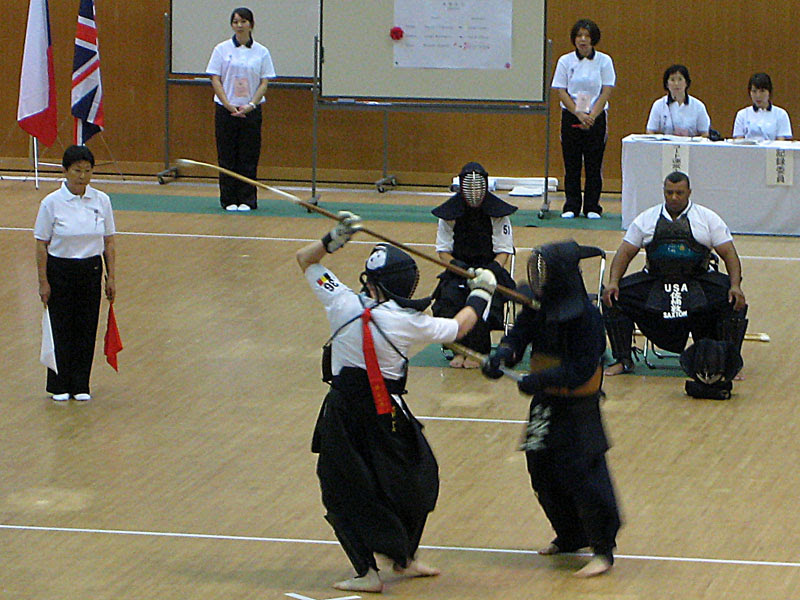 The closing ceremony was last, but the ladies in my Naginata club wanted to go see the exterior of Himeji Castle[2], so we left.

Here are the results:

It was really exciting to see what's going on internationally with Naginata!

The INF World Naginata Championships are held every four years. Apparently the next one will be in Montreal in 2015. I'm psyched because I love Montreal and it's a mere five hour drive from my hometown, so chances are I'll go and combine it with a visit home. :)

[1] Two of the traditional schools of Naginata that modern-day Atarashi (new) Naginata is based upon.

[2] What little of it could be seen, since most of it is covered in scaffolding for a several-year-long restoration.
Posted by Kristin at 12:03 AM

Kristin
I used to live in Japan; now I'm back in the states.